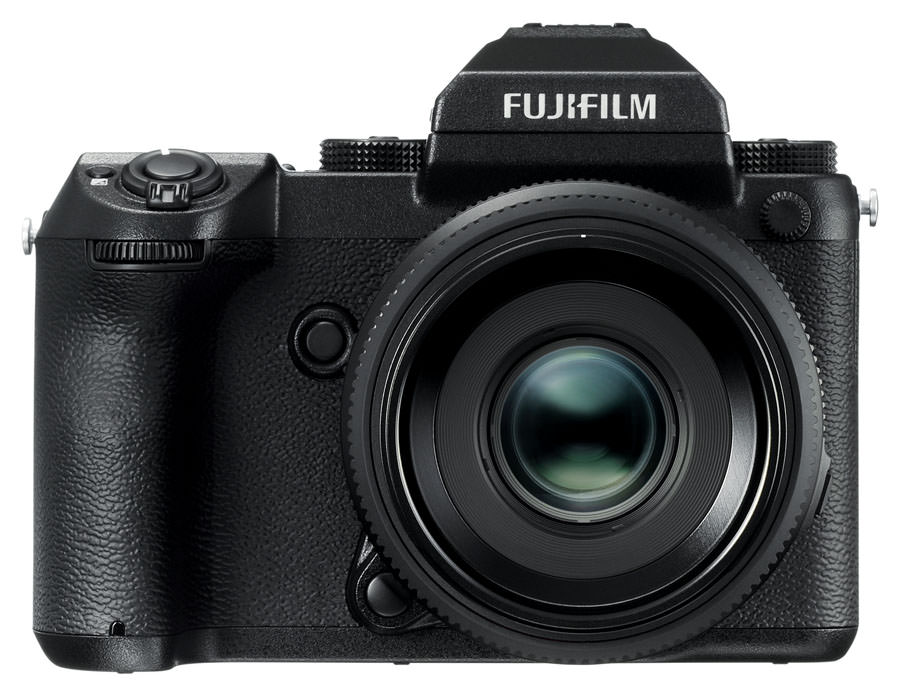 It is unusual for a camera company to launch into a new format, especially when it’s medium format. But does this herald the beginning of a new era in ultimate quality photography – at a more affordable price?

Recently , a camera company surveyed a group of photographers about the reasons they use medium format cameras instead of a smaller DSLR or CSC model.

The reasons vary, but essentially it is because of superior image quality. Yes, smaller format cameras are amazing, but if you want to make bigger photographs or have greater dynamic range, then size does matter. And medium format is superior.

However, the downsides for medium format are many: larger size, more weight, fewer features, fewer lenses. There are sacrifices to be made, but to be honest, they don’t really matter for photographers searching for image quality. In comparison to the days of shooting large format film cameras, modern medium format is a breath of fresh air.

And maybe with the new Fujifilm GFX 50S the breath has turned into a gale! 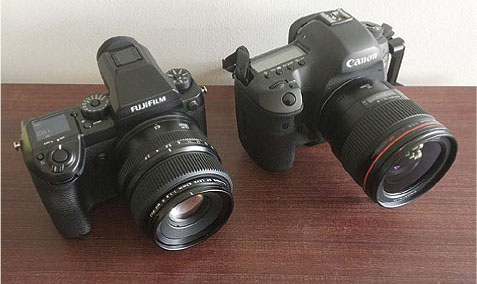 Fujifilm GFX 50S compared to Canon EOS 5DSR - there's not much between them in size and weight.

So, what is the GFX and why should you be interested? The GFX is Fujfilm’s first medium format digital camera. It features a 50-megapixel sensor in a compact, mirrorless camera body that isn’t much larger than the smaller X-Pro2 and X-T2. The lenses are obviously bigger (to handle the larger format sensor) and the camera body is deeper too, to hold all the electronics needed for the larger sensor.

However, we’re comparing the GFX to what are already very small cameras. Put the GFX up against the 50-megapixel Canon EOS 5DSR and there’s not much in it. Weight and volume are very similar, so what Fujifilm is presenting is access to medium format photography without the penalty of size or weight.

Compared to Hasselblad, the Fujifilm GFX will be several thousand dollars cheaper, a little more expensive than the Pentax and considerably less than the Leica or Phase One systems. For photographers wanting to take the step up to medium format, two of the biggest hurdles – size and price – have been overcome. Sure, it’s still an expensive camera compared to a CSC or entry-level DSLR, but for those in the know about medium format, it’s a step in the right direction.

And image quality is stellar. The colour is excellent (as you’d expect of an X-Series Fujifilm camera) and there is plenty of exposure latitude. However, the big change is the camera’s usability – its ergonomics and versatility. This is a small camera with a big sensor, meaning you can use it hand-held in places that are troublesome for more fulsome medium format cameras.

Don’t take this as carte blanche for single-handed shooting from the hip. Sure, you can do it, but this is still a medium format sensor. When you enlarge your image up to 100% on your computer screen, everything is magnified including missed focus and camera movement. You will need to know what you’re doing to make the most out of this camera.

Of course, if you view your images at 5O% magnification, it’s just like using a 24-megapixel sensor and maybe your technique deficiencies will be hidden after all. Shooting medium format is a skill that isn’t difficult to learn, but mustn’t be forgotten.

You will be excused for thinking you’re shooting with a CSC or DSLR camera when you pick up the GFX, and no doubt this was Fujifilm’s intention. And where it is priced, no doubt Fujifilm is hoping to attract both professional and enthusiast photographers, so it is important that the camera is easy to use.

And it is. Shooting with the camera is a beautiful experience. Apertures are controlled on the lens, shutter speeds and ISO on the camera body with generous dials that can be locked into position (very much X-Series design). The detachable electronic viewfinder is large and very bright with a 3.69 million dot screen, but you can also use the 2.36 million dot touch screen LCD on the rear of the camera.

On the top of the camera is another LED screen detailing important camera settings, but this information can also be seen on the rear LCD or in the electronic viewfinder itself.

When it comes to autofocus, the mirrorless design allows Fujifilm to offer up to 425 autofocus points spread across almost the entire image area, meaning it is very unlikely you will want to focus on something that is not covered.

Importantly, you can adjust the focus point very easily, even with the camera to your eye, using an eightdirection focus lever. The GFX also offers Face Detection and Eye Detection AF, so suddenly the camera is looking very appealing for professional wedding and portrait photographers.

One of the challenges faced by wedding photographers is exposure latitude. Whether shooting from inside a dark church to a bright outdoors, or simply maintaining detail in both the bride’s white dress and the groom’s black suit, medium format sensors benefit from a generous exposure latitude. The GFX is claimed to have 14-stops (EV) dynamic range and this is one of the prime reasons for switching from a DSLR or CSC up to medium format. 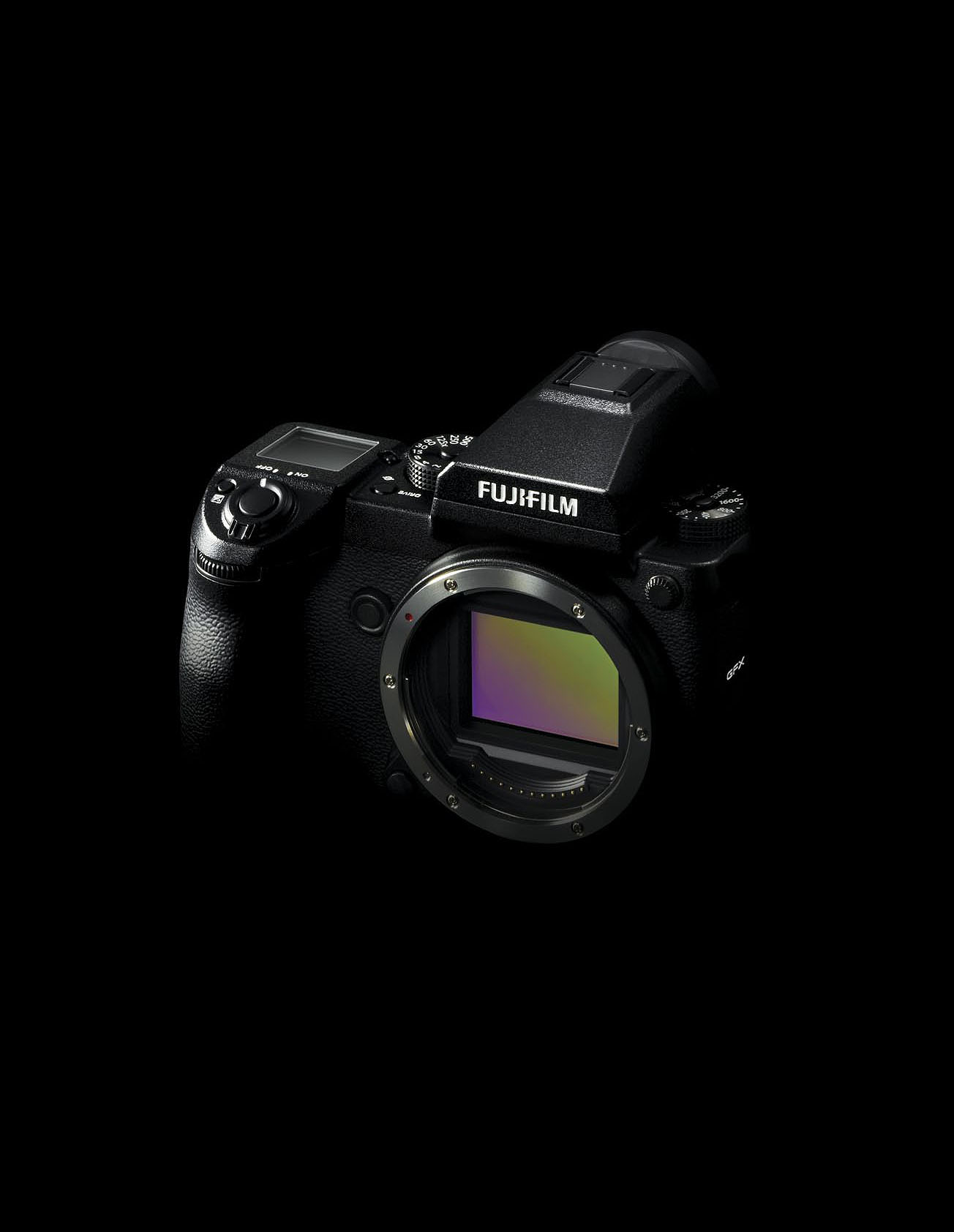 Some reviewers have wondered why Fujifilm didn’t carry the X-trans filter system across to the GFX’s sensor. Probably because it wouldn’t be needed on the larger medium format sensor, although it has been suggested that the X-trans system would require a lot more processing muscle.

Tiny red, green and blue filters are placed over individual pixels on a sensor, thus creating colour sensitivity. The standard Bayer pattern has blocks of four filters, two green, one red and one blue. However, on small sensors, the Bayer pattern can cause problems with colour fidelity and moire , so an optical low-pass filter is added on top to correct for this.

Unfortunately, the low-pass filter slightly blurs the image, hence the need for image pre-sharpening when you process your raw files. So, with the Bayer design, you blur the image to fix the colour and moire, then sharpen them up after, but it’s never quite as good.

In comparison, the Fujifilm X-trans filter system, as found on its APS-C size sensors, uses a block of 36 filters which has no issues with colour fidelity or moire, so there’s no need to use a low-pass filter and the resulting images are much clearer and sharper, straight out of the camera.

However, the Bayer pattern on a medium format sensor doesn’t suffer from colour fidelity issues, and rarely from moire. The physics of light that create problems on small sensors aren’t as prevalent when the sensor is larger, so as I understand it, there was no benefit in introducing the X-trans filter system. (N.B. Moire can still be seen from time to time on medium format camera files, but in practice, it is a much rarer event than on smaller sensors.)

So in summary, the medium format GFX has excellent dynamic range, no low-pass filter over the sensor (meaning super sharp images) and 50-megapixel resolution, all packed into a small camera that is fully automatic and easy to use, but there are many other features.

The Fujifilm G format image sensor measures 43.8x32.9mm, so not quite the 60x45mm of a true medium format camera (the same can be said about all the current 50-megapixel medium format sensor cameras), but nearly double the area of a full frame DSLR.

On top of this sits the X-Processor Pro image processing engine, which also handles Fujifilm’s Film Simulation modes if you’re happy to work with JPEG files. The X-Processor Pro will also process the camera’s raw files into 8-bit TIFF files on board if required. Capture can be set to a range of different sizes and frame ratios, but the largest is 4:3 at 8526x6192 pixels as compressed raw, uncompressed raw files and/or JPEGs. HD video is also available. 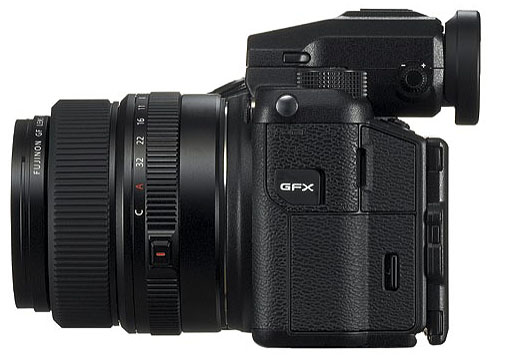 Although it may be difficult to see in these small reproductions, higher ISO settings up to 800 are excellent, but even up to ISO 6400 the files are very usable, especially when compared to a similar size file from a DSLR

The ISO ranges from 100 to 12,800, with extended sensitivities from ISO 50 up to 102,400. ISO 100 to 800 work brilliantly well, but at ISO 6400 and 12,800 you can clearly see the effects of the higher settings. Nevertheless, you need to remember you are looking at a 50-megapixel file, so if you view it at 50% magnification on screen, this will approximate what you’d see from a comparable 24-megapixel DSLR and suddenly you realise there’s a lot you can do with these files. The high ISO settings are a boon for medium format and you can certainly enjoy low light shooting with the CMOS sensor.

The camera body is weather sealed against dust and moisture, there’s a dual SD memory card slot and both support the UHS-II format. The rear LCD screen can be tilted up and down and you can add a vertical battery grip as an optional accessory.

Top shutter speed is 1/4000 second, although an electronic shutter gives you access to 1/16,000 second. At the other end, you can set time exposures up to 60 minutes – and this sensor will handle them as well. You can shoot at three frames per second for up to eight frames in raw, 13 frames in compressed raw and until the memory card fills up with JPEGs.

In the studio, the flash sync speed is only 1/125 second, although you can choose between first and second curtain synchronisation. There are five types of bracketing, including white balance and ISO, you can capture multiple exposures or set the camera for interval shooting, there’s a voice memo function for note taking and you can take control of your camera using the Fujifilm Camera Remote app on your smartphone.

On release, there were three lenses: a standard 63mm f2.8, a 120mm macro and a 32-64mm zoom. Another new lens is on its way and you can also mount Hasselblad H lenses.

In many ways, the success of the Fujifilm GFX (and any other new camera to the market) lies with the lenses available for it. If the GFX is to become a favourite for wedding and portrait photographers, for instance, then Fujifilm needs zooms the equivalent of a 24-70mm and 80-200mm, which are standard fare in these genres. For landscape and travel photography, wide-angles are needed.

In comparison to conventional medium format cameras, the Fujifilm GFX handles exceptionally well, but it’s not as yet as consummate a performer as the X-Pro2 or X-T2. The smaller X-series of cameras went through a series of refinements and no doubt the GFX will need to do the same.

However, the quality you get from this camera is exceptionally good. The lenses have no trouble resolving fine detail on the 50-megapixel sensor and as a package, the GFX system will allow you to shoot medium format quality with the convenience of a small, compact camera.

And it is as automatic as you want to make it.