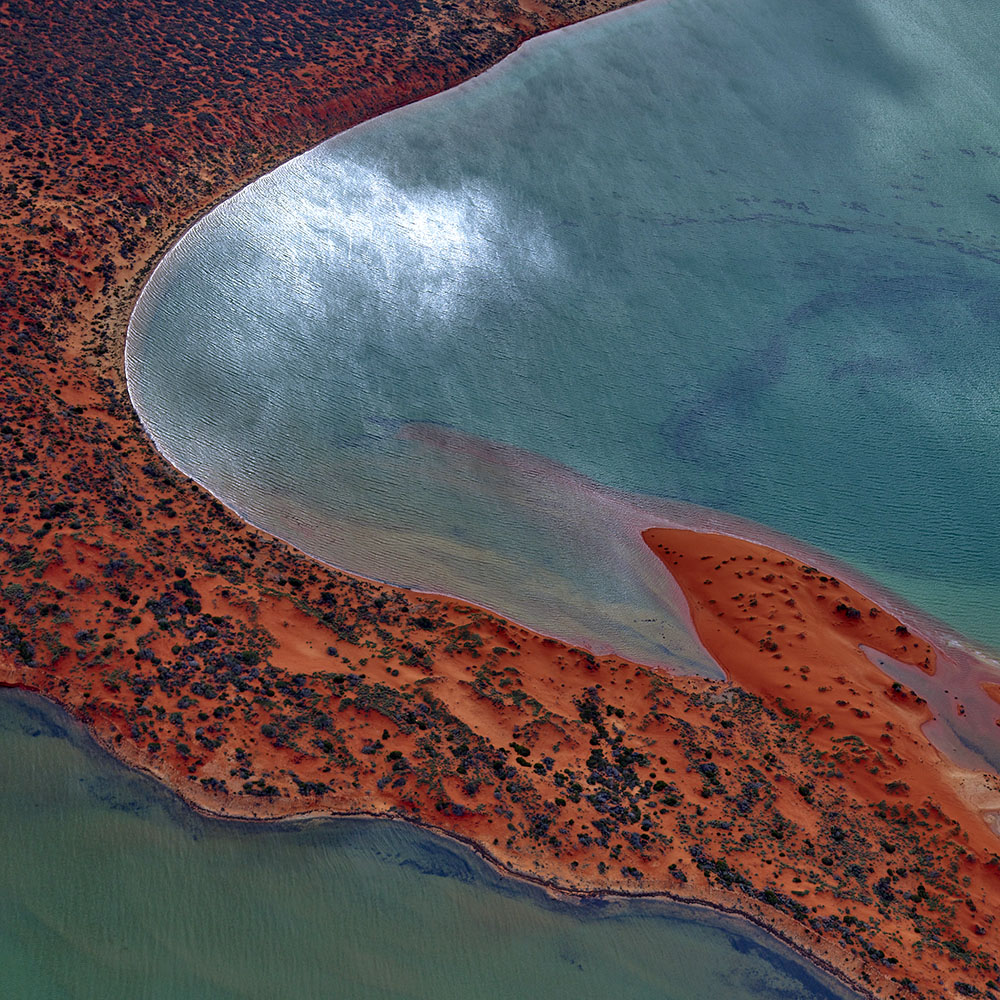 Just back from Shark Bay and an aerial photography workshop I presented with Tony Hewitt. There's no doubt that Shark Bay is a fantastic location for learning aerials because there are so many great (and famous) photos to be found, all within a short flight of the Denham airport.

Looking at the exposure details for the photo above, you might wonder why I used such a high shutter speed and moderate aperture. Often I find myself struggling to reach 1/2000 second which is my preferred minimum shutter speed for aerials, but when you include reflections of the sky and sun in your image, the camera's meter goes to work and exposure is reduced. I reduced it further - this shot had an exposure compensation of -3.67 - to keep some semblance of tone and detail in the highlights, and then I lightened up everything else. It's amazing what we can do with our modern cameras.

When flying, I shoot lots of photos. I'm sure David Oliver with his years of experience as a wedding photographer could do a one hour aerial shoot and take just 24 perfect frames (yes, this is a dig at David for his comments about my portrait of Sue and her horse at Middlehurst), but lesser photographers such as myself find our shutter finger working overtime. Let's face it, when you find an interesting 'target' to orbit around, the angles and shapes keep changing and so I keep firing the shutter. Much easier to take lots and edit the shoot later.

My preference is to use a larger capacity storage card in the camera so I don't have to change the card half way through the shoot. It would just be my luck a card fills up when the best shot of the day is down below. Or that I dropped a card when changing them, especially with the doors off the plane! However, this is not likely to happen when I use higher capacity cards and I set the two storage card slots on my camera to 'overflow', so when one card fills up, the next one is ready.

The other option is to use smaller capacity cards in case a card is corrupted, but my thought is that you're twice as likely to have a card corruption if you use two cards. Now, before I get lots of emails telling me I'm misguided, I confess to having only had one card corrupt in around 20 years and I was still able to save the photos with recovery software. And if you're worried about a card failing, why not use two higher capacity cards and use the second slot as backup? Problem solved!

As a Sandisk Extreme Team Member (I'm not quite sure why we're 'extreme', but there you go), naturally I'm up in the air with Sandisk cards. At present I'm shooting with 256GB cards, but I'm just about to upgrade to a 512GB card (SanDisk Extreme Pro CFexpress Card Type B) and that should allow me to capture 2000 photos, more than enough for an extended aerial shoot.

And if I don't fill up the card? After every shoot, I download my files to my travelling computer and back them up to an external drive - but I might not clear the card immediately. It just makes sense to methodically transfer your precious images to a more permanent destination as soon as you can - you wouldn't want to be formatting a card that hasn't been cleared, but that's another story!