Back To Arkaroola - Finally! 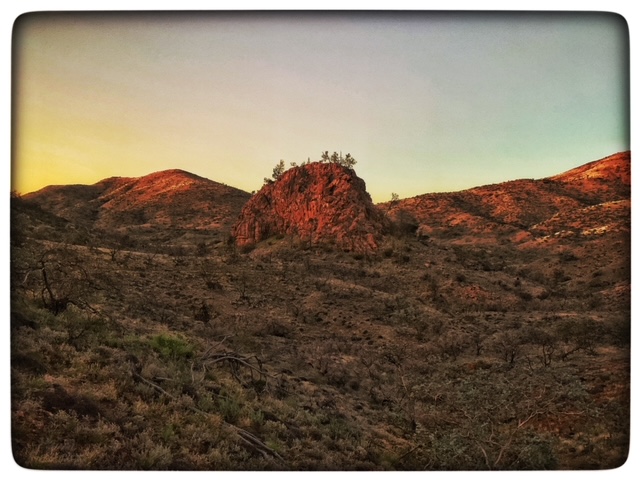 A smartphone photo processed in Snapseed? Don't panic! I haven't given up on my other cameras just yet, but I'm busy! I'm finally away on a photo tour, but not one of my own. I'm travelling with Robyn and Tim Moon and their Wanderlust Tours as a paying guest.

Around 40 years ago (and yes, I know I'm only 27), I visited Arkaroola with fellow photographer Elizabeth Lough and my dad. Dad came along to be a chaperone as Elizabeth's husband had expressed some concern! We drove from Sydney to the Flinders Ranges, ending in Arkaroola just as a storm system rumbled through. After an incredibly windy night in our tents, we left early the next morning to avoid the rains and potentially flooded creeks - it was an exciting and disappointing exit. Exciting because the rivers were rising and each watercourse was a little deeper than the last. Disappointing because the landscape at Arkaroola was sensational and I didn't get to see and photograph enough of it.

Over the years, I've almost made it back to Arkaroola a couple of times, but it was not to be. Even this tour was delayed because of COVID - we were supposed to go last September! But, finally, we're here - and I am not disappointed! Arkaroola is a wonderful destination for photography. It is distinctly different to the more popular Flinders a little to the south, more rugged, more raw.

Around 15 minutes north from the Arkaroola Wilderness Sanctuary and resort where we're staying, lies a small valley with this remarkable rock sitting in the middle - the pinnacle. When the location was first described to me, I expected to be disappointed because it would be covered in thick bush or difficult to access, but the reality is you jump out at the carpark and walk around a short track, with a choice of views. This angle I particularly liked, but I'm sure there are many others equally endearing.

While we were waiting for the light to drop and the coloured 'gloaming' to rise, I had a little time on my hands, so I used my phone to send a Snapchat to the family and then used Hipstamatic to shoot a couple more. This one was processed in SnapSeed - and yes, it's a little over-cooked, but what the hell! I'm having fun!

So, finally, we're back and we're travelling. Let's hope this is the end of COVID!

I have a workshop down in Narooma with Len Metcalf in a few weeks and there are a few spots available if you're interested - love to have you along!

Narooma with Len Metcalf and Peter Eastway, 3 - 7 May 2022, click here for further details.