This photo is out of focus! Well, that's not quite correct. The background mountains are sharply focused with my greatly loved Fujinon XF 200mm f2.0 lens, but the foreground mountains are a little soft. There wasn't sufficient depth-of-field to keep them sharp. I didn't worry about this initially until I produced an A2 size print when the issue became much too obvious. I could hide this error away on the website easily enough, but not on paper!

What happened? At the time, I was shooting Sue McDonald on her horse at Middlehurst (did we work out if her horse was called Tony or not from an earlier newsletter?), so I wanted the background for her to be a little defocused. The solution was to shoot with the lens nearly wide open (I'm a bit disappointed with myself to see that I shot at f2.8, whereas I spent all that money on an f2.0 lens!), but when I saw these lovely shapes in the mountains as I was waiting for Sue and Tony to get into position, I simply pressed the shutter. Who wouldn't?

Well, a better photographer would have closed the aperture down first, say to f8 or f11, and then the foreground mountains might have been a bit sharper - and they wouldn't have wasted a sheet of lovely Canson Rag Photographique paper!

So why am I coming clean about this? Why am I airing my dirty laundry in public? It's because technology has provided me with a solution: Topaz Sharpener AI. I've written about this plugin/standalone before and how it helped correct the softness in some of my aerial shots, so why not in a landscape as well? As you can see from the screen shot below, fixing up the foreground had unintended consequences. 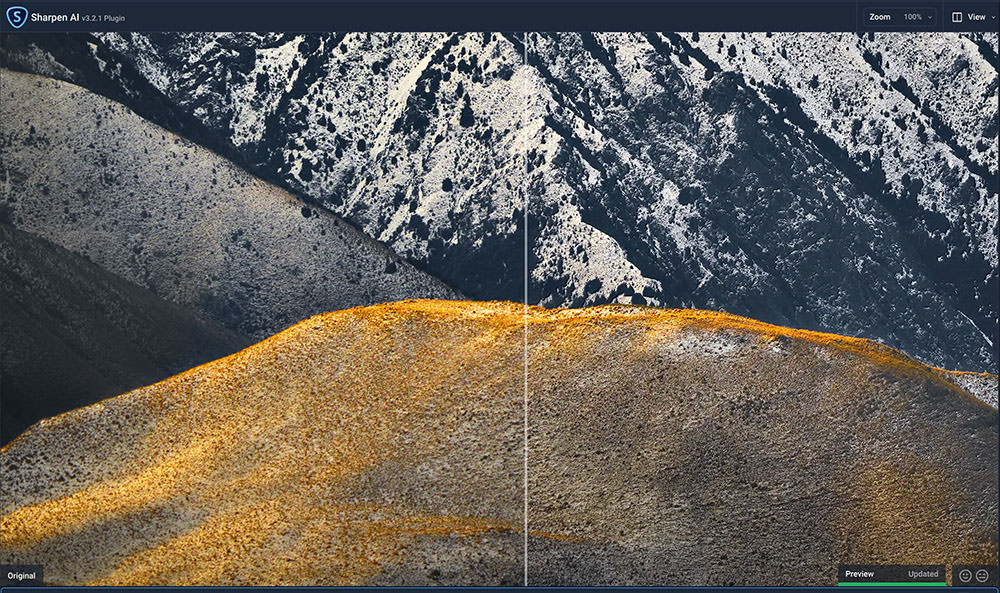 It might be a stretch to see this on the screen shot above, so you'll have to take my word for it. On the left is the original with the slightly blurred foreground. On the right, the corrected version and while Sharpener AI has crisped up the foreground nicely, it has overcooked the background which was already correctly focused. The (2nd) solution to the problem with the (1st) solution is also easy: apply the sharpening to a copy layer and, using a mask, brush in the sharpness only on the foreground where required.

It used to be that if you didn't have the photo in your pixels, you didn't have your photo, but with a number of new plugins and standalone applications, such as Topaz Sharpener AI, I'm having to re-think this. It won't make me a sloppier photographer out in the field (I can fix it later in Photoshop), but it will expand my opportunities knowing that as part of the post-production, I can render the result that I want.

What a great time to be alive in the history of photography!