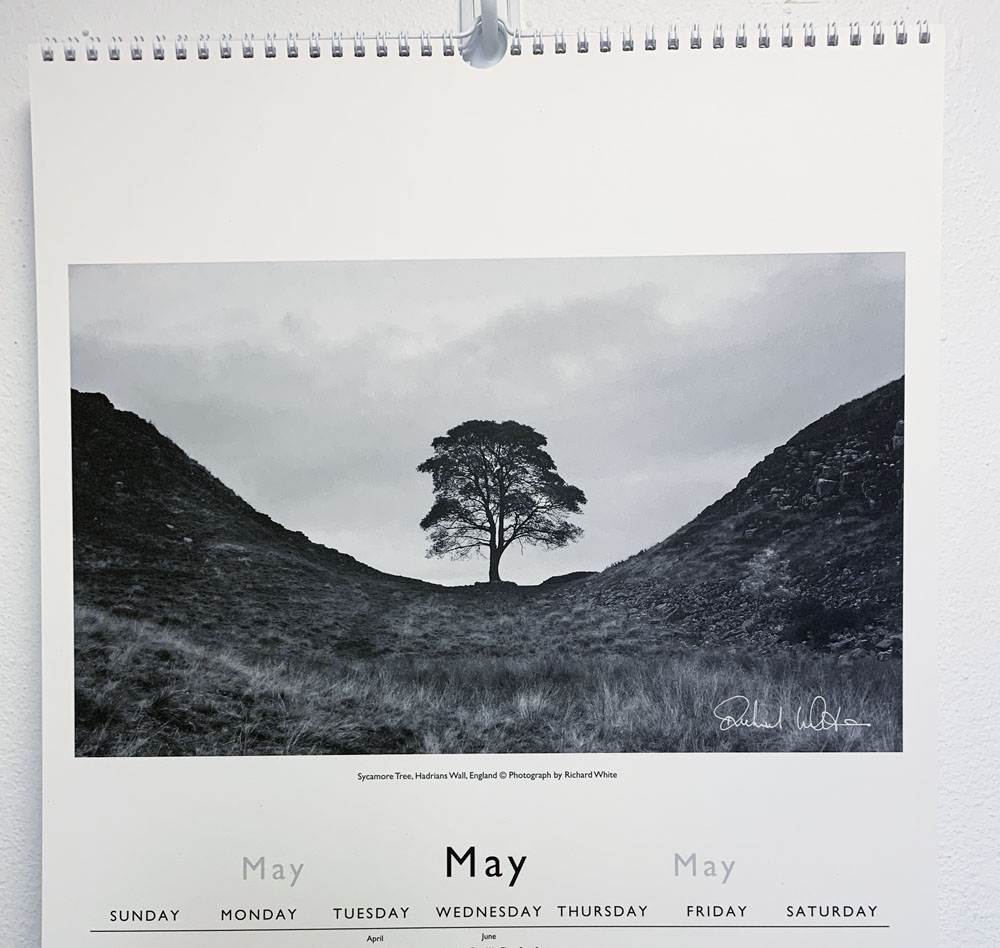 Richard White's 2020 calendar on my wall at the studio. What a great photo to finish on.

Richard White died last week, doing what he loved most, talking and discussing photography. His passing was unexpected for Richard, the person on the other end of the phone, Richard's family and the world-wide photographic community. And while there is undoubtedly a lot of grief for us all to work through, I'd like to celebrate Richard's life and contribution.

In fact, I can hear him now. "Don't make a fuss about me, concentrate on the photographs". Well, Richard, I love the May photo this month in your 2020 calendar. It was shot at Hadrians Wall in England and I can see it as a metaphor for so much of what you stood for.

It has a beautifully balanced composition, just as your many articles and presentations were carefully balanced. And the wall represents the different sides of photography, perhaps the gap between film and digital and all that the two mediums have come to represent.

Richard was not a fan of digital photography and post-production, but I mustn't misrepresent him. He owned digital cameras and used Photoshop, but what he loved most was his 4x5" view camera and processing sheets of black and white film. He was a large format fan. Digital was just how he presented his work for publication in Better Photography magazine.

And what a great contributor. With our 100th issue just about to be released, Richard has contributed to every issue since No. 10. And given we're a quarterly magazine, that's 23 years of putting up with an editor who had quite different views about what photography meant.

And this is what I love about Richard. He had his opinions. He knew what he liked, but in presenting his case, he always put himself in the shoes of the other side. A foot on both sides of the divide. He didn't criticize modern post-production technique per se, rather he queried whether what was being produced was of any real value. And I think he had a good point. There is so much poor quality photography in the world today, it's true to say digital technology is responsible, simply because it has made photography so accessible to so many. Just pick up your phone.

And in the early days, even the experts were good at making crap digital shots. I still cringe when I think about the early post-production we accepted as being 'good'. Richard was the voice of reason and the conscience of photography. He questioned whether the changes in the medium were progress or just a move in a different direction. He wasn't interested in switching to digital in the early days because it simply wasn't as good as film. And then in later years, it was his choice to stay with large format because he was a fan. Rather than following all the new fads and trends, he looked inside to find what really matter to him. That's a strength of character we can all emulate.

Richard White leaves behind a legacy of great Australian black and white landscape photography. Like Ansel Adams, he was passionate about education and the environment in which he lived. Unlike Ansel (for whom I have the greatest respect), we won't be able to fit Richard's best work into a small book of 400 prints! Ansel was a black and white technician, Richard was a black and white artist - who in many ways stood on Ansel's shoulders to take photography a step further into the future. He was progress in his field of endeavour.

Richard, you will be greatly missed.