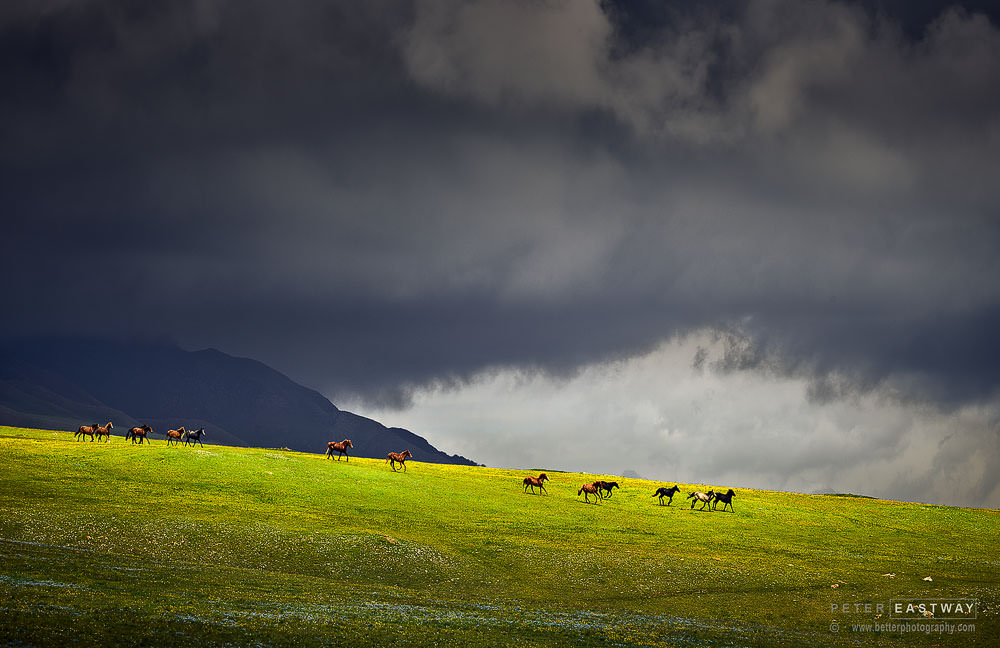 I'm setting myself up, aren't I! I'm just back from the three Stans - Uzbekistan, Krygyzstan and Kazakhstan - and what an amazing photo tour it was. Three exotic countries, quite different from anywhere else I've travelled and definitely places to return. And my wife, who loves horses, was very happy.

It all happened on our final day in Kazakhstan. We were up on the Assy Plateau, an 'other world' of alpine meadows, flowers, streams and horses. We even found an old Soviet observatory, but I'll save that for another story. At the beginning of each summer, the nomadic herders take their horses up to the meadows as the snows melt and retreat. We hoped to find them in their yurts, but we were possibly a little early - but it didn't really matter. The landscape was just so amazing.

I set my camera up for the landscape you see here. One of the photographers asked me a question, so I turned around to give a hand, and then as I looked back, what should I see coming over the hill. A herd of horses. And not just one or two, but hundreds of horses. The photo above is one of several, this one showing a few of the stragglers cantering to catch up.

I explained to my group of photographers that this was all pre-planned and that we could organise the wildflowers, the stormy skies and the horses whenever we wanted to. Not! I even managed to capture this photo on medium format using my Phase One A-Series with the 180mm - it's probably the slowest camera set-up I have as focus is critical, but as luck would have it, I had just pre-focused on the grasses where the horses were cantering!

So, luck plays absolutely no part in brilliant photography, but being both ready and lucky certainly does!