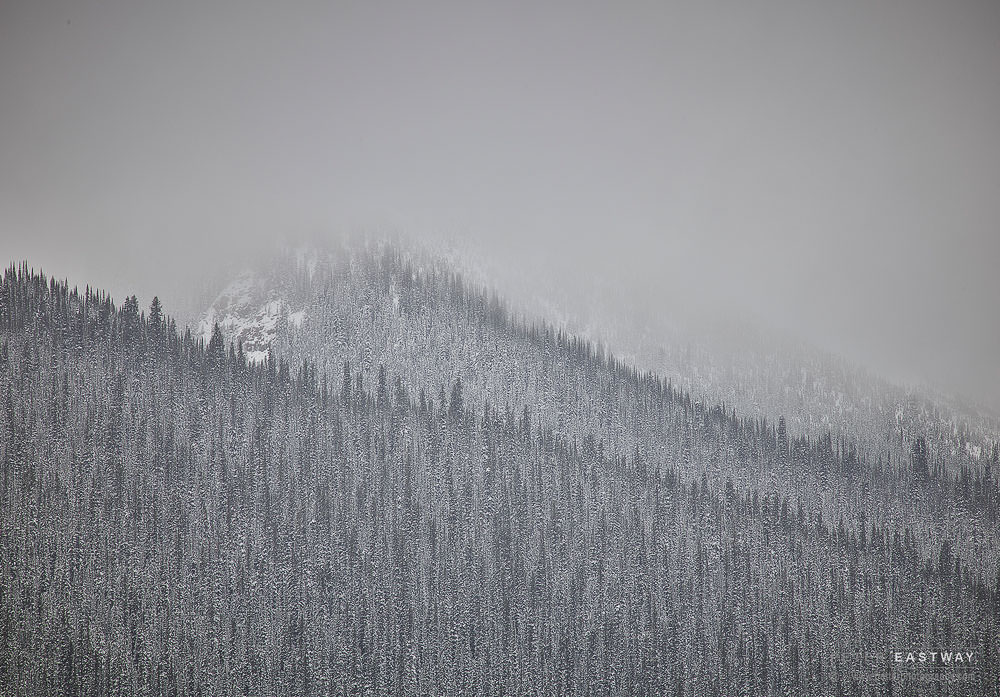 This is one of my favourite photographs from a trip up the Icefields Parkway in Canada. Why? I'm not exactly sure, but I think it is a combination of me loving snow, of moody light, and of the beautiful textures created by the trees and the way they fold themselves over the foothills.

A lot of travel photography is taken from the side of the road. Even if you're heading off on a trek, you'll drive to the starting point and there are invariably opportunities along the way, especially if the light is changing. On a one to two week trip, I'd expect at least one, two or maybe three weather systems to push through, creating cloud and lighting opportunities - so you need to be ready.

On this occasion, as I've written before, we had early snow. When we started out in the morning in heavy snow, we didn't think we'd get to see anything much at all because visibility was poor, but later in the morning the clouds lifted a little and, using a telephoto lens, I was able to isolate the simple shapes of the tree-covered hills. The telephoto lens lets you simplify your composition and while it won't be very apparent in this small reproduction, there is some beautiful detail in there.

Detail in a photograph remains important to me. I'm happy to capture images that are soft and blurry, but that's a different head space. Part of what makes a photograph a photograph is the way the lens resolves detail. The closer you look, the more you see. So most of the time I'm travelling, I use a tripod. David Oliver laughs at me, saying he's taken his shots by the time I have the second leg of my tripod extended - and there's an argument there. On the other hand, usually the landscape isn't going to run away and spending a little time to set up the tripod can be well-used as you reflect on your subject. The resulting composition is generally more considered than a hand-held one - and I like that. It's not a better way of shooting, rather a different way - and each to their own.

If you'd like to join Tony Hewitt and me in Canada in October this year, we need to hear from you by the end of May. This part of Canada at this time of year is really popular, so if we're to book accommodation, we have to get cracking. For more details, check out the Better Photography website here.