Sugarloaf Rock from The New Tradition 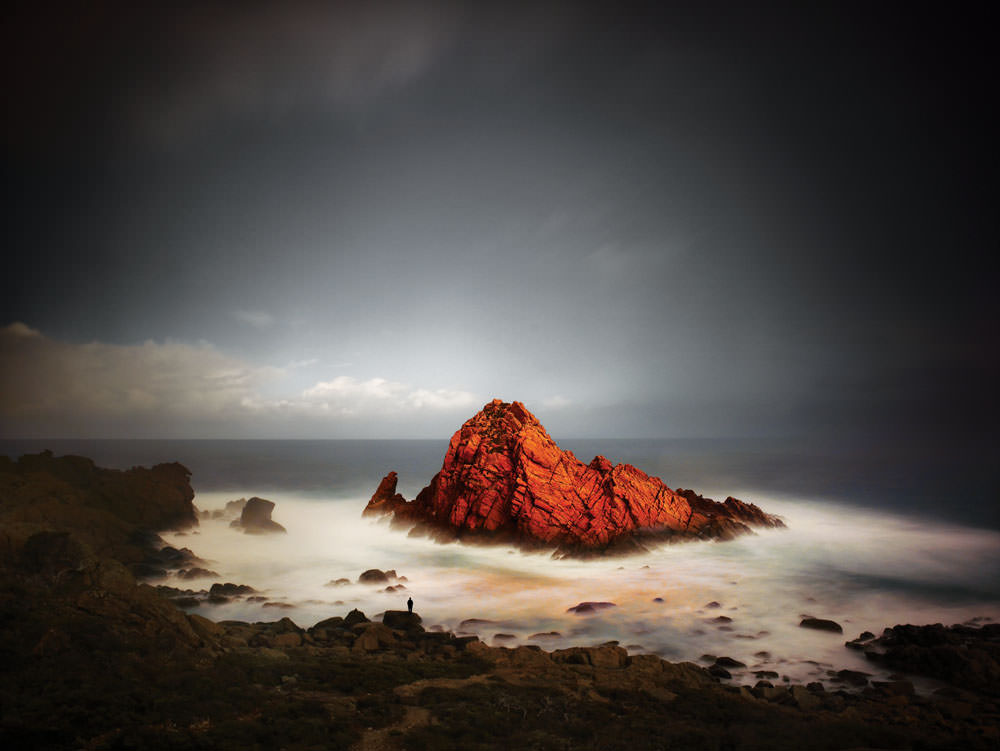 Digital allows the craftsperson to work in many different ways to produce a technically proficient outcome. While some aspects of capture cannot be changed, thinking the problem through with post-production, as additional yet integral steps, becomes the solution.

Sugarloaf Rock is a popular subject for landscape photographers. It sits in Christian Fletcher’s backyard and he usually has several versions hanging in his Dunsborough gallery. On this occasion, Tony Hewitt and I were returning from an early morning shoot, but decided to take a detour before breakfast.

The weather over the coast was pretty wild, with strong winds and rain squalls. As we walked up to the lookout, the sun broke through the clouds behind before we were hammered by rain. As we ran back to the car to avoid a proper soaking, I was thoroughly disappointed there wasn’t time to capture the photograph. I’d taken a quick snap with a compact camera, but it was so fleeting there wasn’t time to pull out the medium format camera.

The weather passed through quickly and so we wandered back to the lookout with our cameras and tripods. The light wasn’t the same, but we went through the motions of setting up a few photographs. And then the unbelievable happened: another rain squall appeared on the horizon.

I had my camera locked down on the tripod and took a few photographs with a fast shutter speed – around 1/250 second. Everything about the image was tack sharp, including the sea and the clouds, but there was no emotion.

The Mamiya 28mm lens had a bulbous front element which made it difficult to attach filters, so the solution was to drop a gelatin filter into a holder behind the lens. This required one to take the lens off the camera, drop in the filter, and then reattach the lens. The complication was that as I was using a 10x neutral density filter, I wouldn’t be able to refocus the lens once the filter was in place. So, I needed to pre-focus the lens before inserting the filter, making sure I didn’t alter the focus in the process. (Hasn't mirrorless made this process so much easier!)

Somehow, I managed to get the lens back onto the camera just as the squall hit. Tony held the legs of the tripod while I pushed down on the top of the camera, trying to keep the camera as still as possible for the 30-second exposure. But it wasn’t possible.

The 30-second exposure had all the emotion I wanted, but the vibration and movement of the camera had slightly blurred the image. The camera might only have moved one or two pixels while the shutter was open, but this was enough to blur Sugarloaf Rock.

However, during 30 seconds, the clouds and waves moved so much that a little bit of camera shake wasn’t visible in these areas of the image. Using the 30-second exposure as a base image, I superimposed the 1/250 second exposure on top in Photoshop. Then using a precise mask, I painted the sharp areas of rock into the blurred, emotive exposure below.

When taking long exposures with high resolution cameras, it doesn’t take much movement to blur the result. Even a little wind or road vibration can cause just a hint of image degradation and so as a matter of practice, I always take a safety shot with a fast shutter speed, so the parts of the image that need to be sharp will be sharp! This process requires extra time in post-production, so a sturdy tripod is a superior solution.

And the figure on the shoreline? I tell everyone that’s Tony.