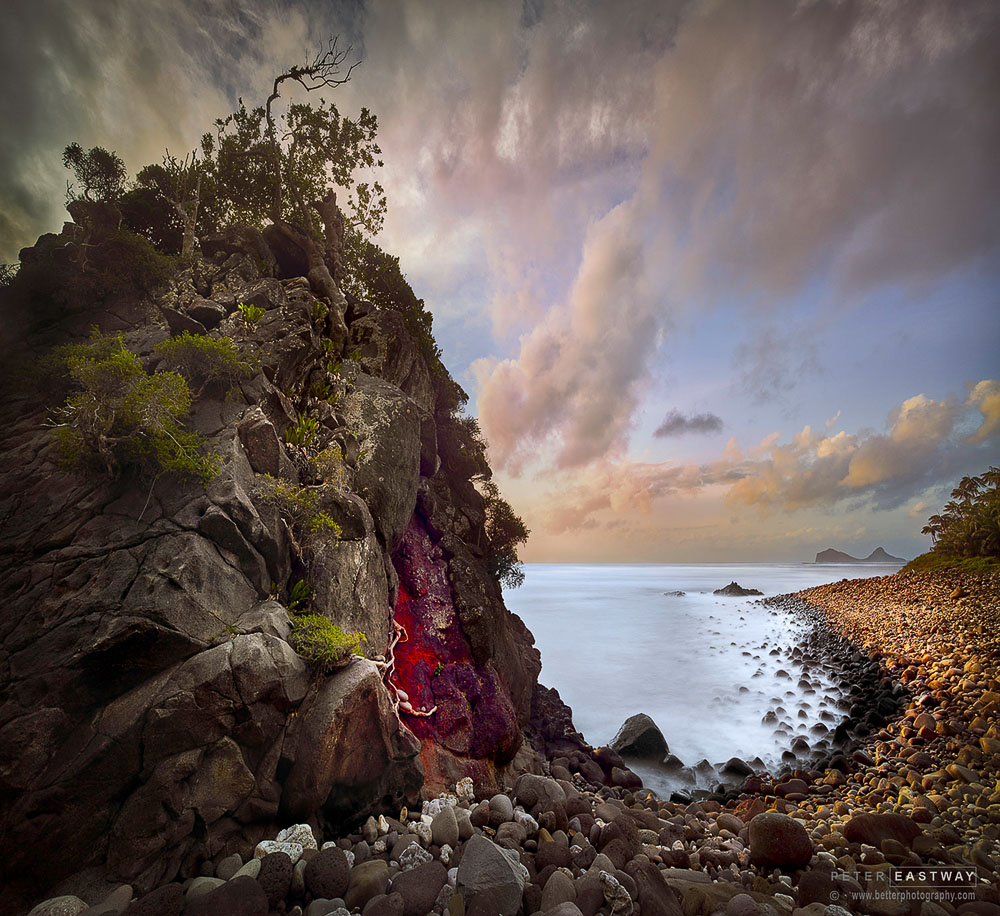 Last week, I realised my personal website (www.petereastway.com) was missing some of my earlier work and the above photo of Little Island shot on Lord Howe Island (off the NSW coast in Australia) was one of them.

Lord Howe Island itself is quite magical, what you'd want in a 'desert island' if you had to be marooned somewhere. It's big enough so you'll never be bored, small enough to easily get around, and there are some very special locations, such as Little Island down the bottom of the trek up to Mount Gower.

Most of the time we were there, Little Island wasn't, but I imagine with big swells and tides, the water laps around it and hence its description. The challenge was finding an angle that included both its shape and location. Standard angles-of-view which included both sides of the island and a clearly defined shape were interesting, but I found this more closely cropped and squished composition to be stronger. Then it was a matter of ensuring sufficient detail in the island itself and dropping in a second exposure (taken from the same angle using a locked off tripod) with blurred water and clouds.

Why two exposures of the same scene? It was windy and the small bushes at the top of the island blurred during the long exposure. As photographers, we don't need a reason other than to say it was my preference to have the bushes sharply resolved with the shorter exposure.

When playing with exposure, the landscape can reveal all sorts of secrets and I love the discovery of the deep red rocks, almost buried in the middle of the island. By drawing out and enhancing the colour, you can almost imagine this a wound, a metaphor for what we're doing to the Earth in so many places. However, the main reason I drew out the colour was to create a point of interest in the composition and, as we all know, it's points of interest that make photographs engaging for our viewers, allowing them to apply their own interpretations and responses.

I hope you enjoy it.

This week, I am down in Narooma with Len Metcalf and a group of photographers on my first photo workshop in many months. I've taken an Epson SC-P906 A2 printer (I've actually purchased this for myself from Kayell, although as an Epson Ambassador, Epson would certainly have lent me one). We also have some great sample Epson Signature Hot and Cold Press papers, and also Canson's Rag Photographique, Platine and Aquarelle (I'm also a Canson Ambassador). Our plan is to shoot, process and print and, given the weather forecast, I think we will be having a little 'inside' time for plenty of printing!

Fingers crossed the world continues to open up and the vaccine does its magic.

In the meantime, don't forget my Landscape Photography MasterClass has been fully updated and you can read all about it and see a great little audio visual at www.betterphotographyeducation.com.