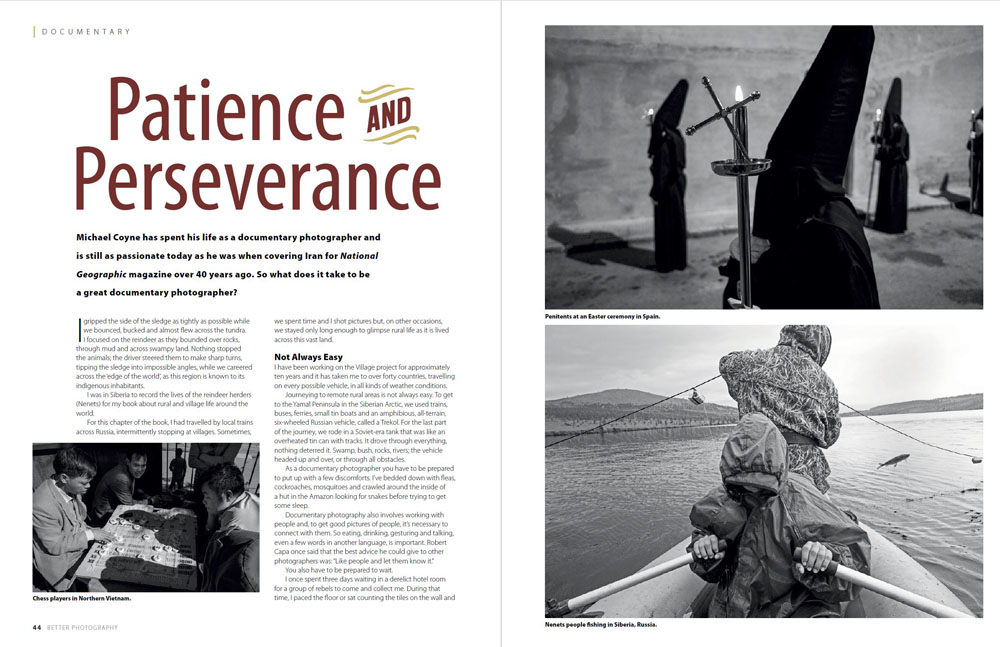 When we look at great documentary photographs, they generally appear effortless. It's like the photographer was just walking along and 'everything' just happened in front of the camera. The truth, of course, is quite different.

Write's Michael Coyne in his article Patience and Perseverance, "As a documentary photographer you have to be prepared to put up with a few discomforts. I’ve bedded down with fleas, cockroaches, mosquitoes and crawled around the inside of a hut in the Amazon looking for snakes before trying to get some sleep.

Documentary photography also involves working with people and, to get good pictures of people, it’s necessary to connect with them. So eating, drinking, gesturing and talking, even a few words in another language, is important. Robert Capa once said that the best advice he could give to other photographers was: “Like people and let them know it.”

You also have to be prepared to wait. I once spent three days waiting in a derelict hotel room for a group of rebels to come and collect me. During that time, I paced the floor or sat counting the tiles on the wall and listening to the ceiling fan going around and round. Nineteen
times a minute I calculated.

Late one night, the rebels came to my room, seized me and my camera gear and dragged me down the back stairs into a waiting ambulance which sped through the army checkpoints and up into the hills. There I joined thirty more rebels who were fighting for their independence against the government soldiers.

Networking, contacts and access are important. It doesn’t matter how talented you are, if you don’t have the right contacts, know the right people, then you can’t get to the right places and take good pictures.