Homage to Truchanas and Dombrovskis 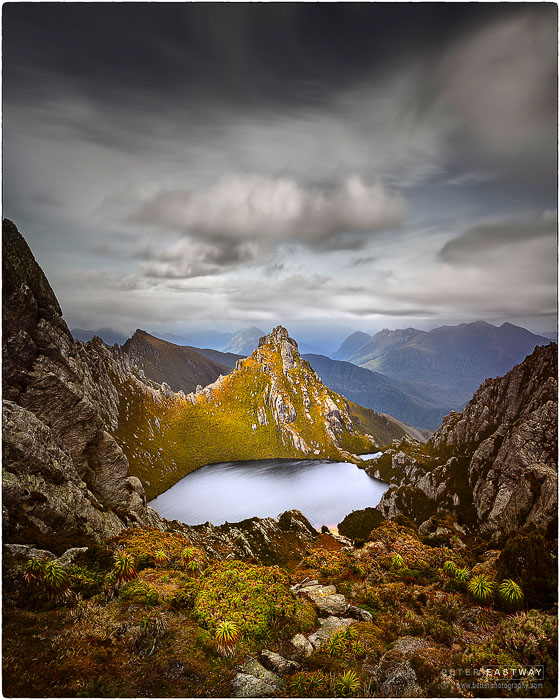 For photographers, an homage is an acknowledgement of those who have gone before us with a respectful deference. Without seeing their photographs and reading their stories, we wouldn't be where we are today, certainly not in a creative sense.

In the mid-1970s, my godmother gave me my first photography book: The World of Olegas Truchanas. By today's standards, the photographs are only average, but at the time, they were groundbreaking. Truchanas was also a big inspiration for Peter Dombrovskis, another Australian photographer who makes Tasmania his home. Their links are very close when you learn that it was Dombrovskis who recovered Truchanas drowned body from the Gordon River.

Dombrovskis was recently honoured with a book and an exhibition of his work at the Australian National Library in Canberra (which we reported on at the time). And perhaps Dombrovskis' second most famous photograph (after his photo of Island Bend) is of the three pandanus trees above Lake Oberon in the Western Arthurs.

Like Truchanas, Dombrovskis also died out in the wilderness, doing what he loved. He was reportedly under Mount Hayes, not too far from Lake Oberon.

A third Tasmanian photographer who has had a great influence on me is Richard Bennett. You can read all about Richard's life and photography online in a recent issue of Better Photography (grab a subscription and all the back issues are available to you). Richard and I have been on several Tasmanian walks together, but we never quite made it to the Western Arthurs, although we talked about it a lot. Richard said it was a place I had to go and his photographs inspired me to make the trip.

However, when I sounded Richard out a couple of years ago, he didn't seem so keen and I wondered how many years I had left before I mightn't be so keen either! The Western Arthurs walk, after all, is claimed by many to be one of the most difficult in Australia.

Mindful that Truchanas and Dombrovskis met their ends out in the wilderness (Richard, I'm glad to report, remains very much alive on Bruny Island), I engaged the services of photographer Phillip Norman and trekking guide Callum Baker to help me make the journey. I carried in a Phase One A-Series 100MP with 23mm, 70mm and 180mm lenses, a light weight tripod and some Nisi filters. The boys carried in my tent, food and extra clothing, plus their own gear, for which they have my appreciation.

And so I managed to get to the Western Arthurs. You can see a short video I've made here on Youtube: https://youtu.be/l3FncH-YrJY

No matter how connected we all are on social media and the internet, photography remains a personal pursuit and I think it's good to have projects and goals in mind. I spent a lot of time considering Dombrovskis's famous photo from above Lake Oberon and how to create an image that respected his preeminence, while representing my aesthetic and a digital workflow. So instead of the three panadanus trees in the foreground, I included the stepping stones that lead down to Lake Oberon, acknowledging the fact that this isn't a new photograph, or a new trail, rather a homage to one of Australia's great wilderness photographers.

The photograph is a combination of three exposures on two separate days, with some spatial adjustments to enhance the size of the peak behind the lake. It was gratifying to note that some of the judges at the recent AIPP Australian Professional Photography Awards recognised the location, but didn't comment on these spatial adjustments, which in The New Tradition, I take as a compliment!