Is the Sky Too Strong for the Horses? 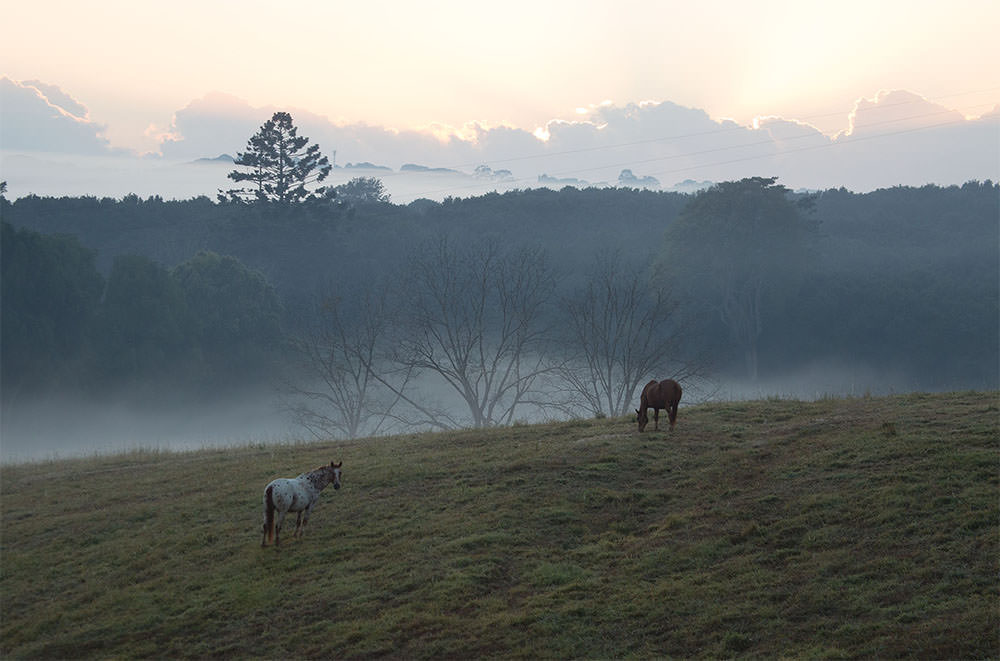 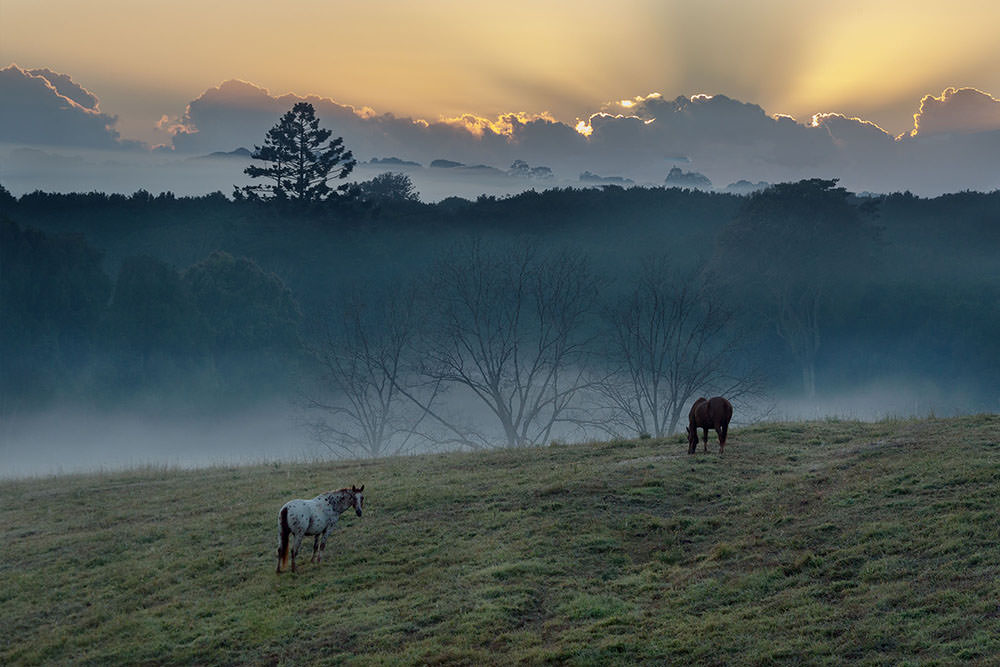 The photographer should be commended for balancing the sky down so that it isn't so distracting, but could our Anonymous perpetrator have done even more? 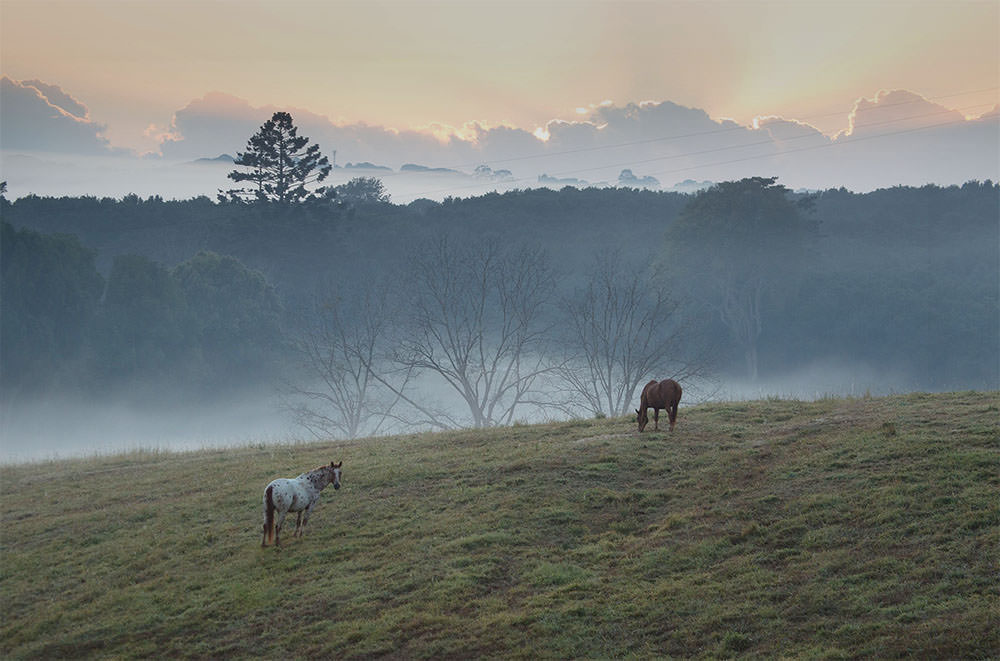 Here's my take on the image, beginning with an evening out of the tonal values in both the foreground and background. 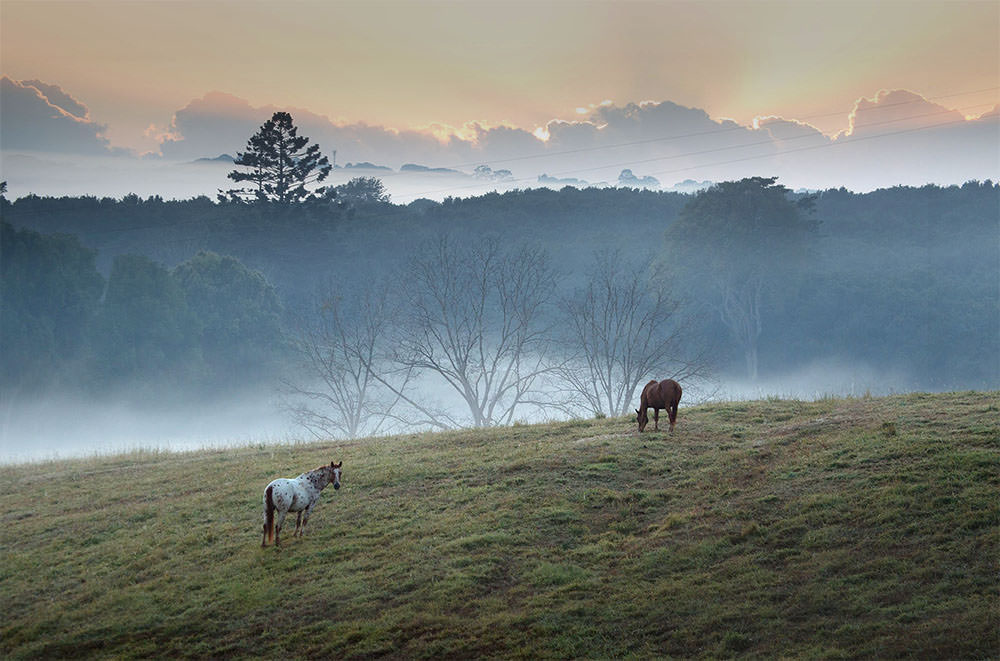 From here, I have darkened down the top and bottom a little further, and then lightened up the middle ground and added a little more contrast. Not a great difference between my edit and the Anonymous Photographer, so I am in good company, but perhaps mine is a bit lighter. Was the photographer's monitor correctly calibrated I wonder? 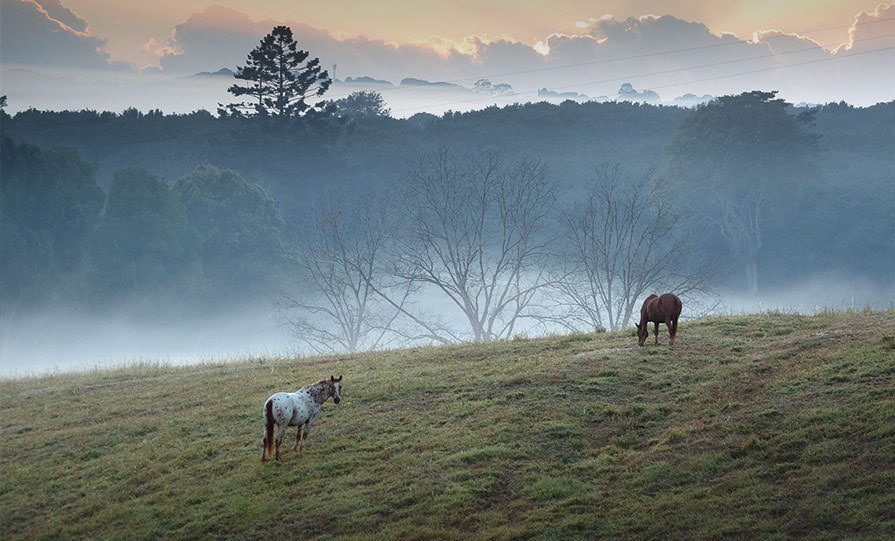 So, where to next? What about cropping a bit more of the sky off? It brings attention down to the horses, but the bright sky is still a distraction. 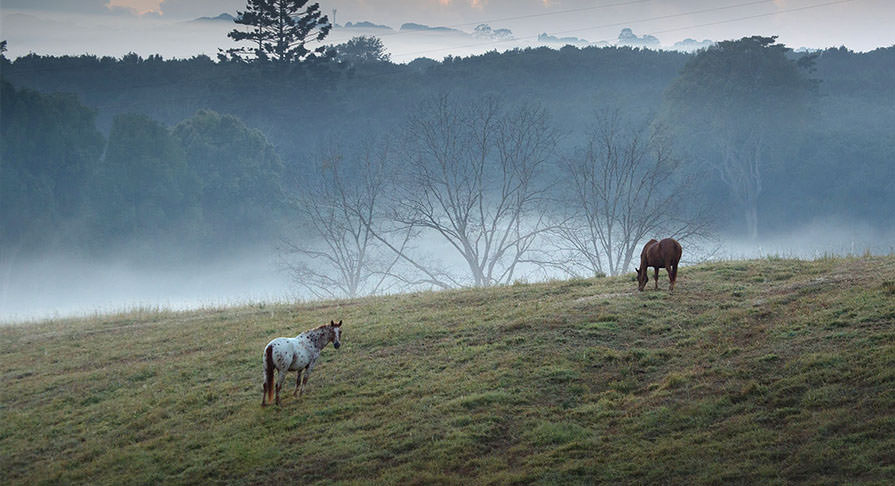 What about cropping the bright sky out all together, just keeping the clouds, although this leaves the lone tree to become a distraction instead...

So, let's crop a bit more and now we have a much simpler image with just the horses and the tree in the mist. I like this personally, but I might have taken my 'feedback' a bit far because now this is no longer the Anonymous Photographer's interpretation. And perhaps the image is a little long and narrow. 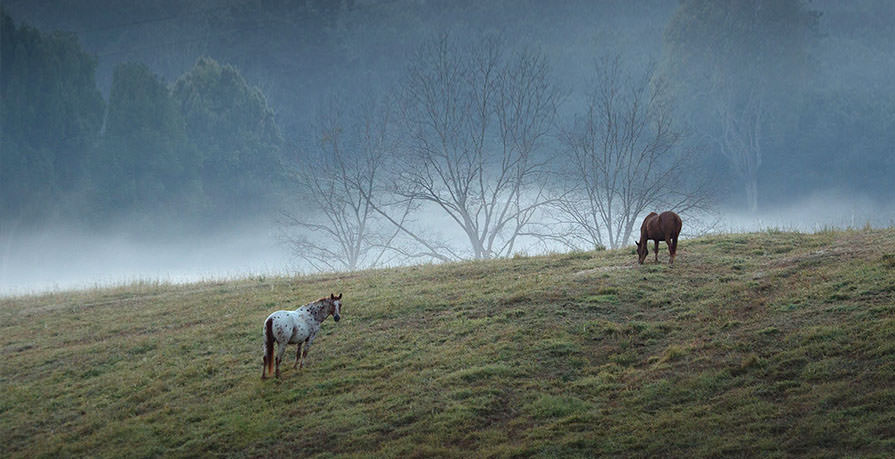 As a penultimate suggestion, the very top of the image was extended (stretched) upwards, just because the previous step looked a little severely cropped. Photoshop was used to select the top 20% and using the transform tool, stretch this section up which I'm sure the casual observer would not object to. 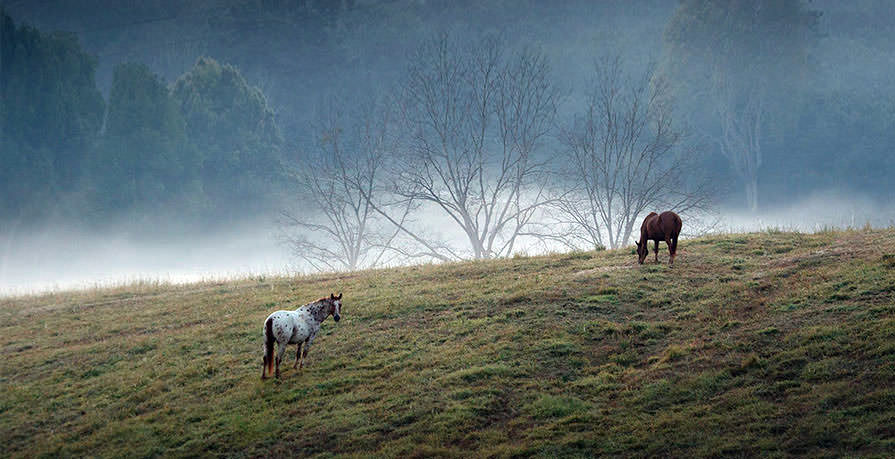 Now that the sky has been removed, I feel the image is lacking in contrast, so an auto levels was applied to give the final image a little lift.

Great Sky, What About The Foreground? Our Anonymous Photographer this week demonstrates a common problem faced by landscape and travel photographers with alarming regularity. Indeed, there is undoubtedly a plot by Mother Nature to frustrate photographers by producing the most amazing sunrises and sunsets, exactly at a time when there is nothing in the foreground that works to create a great composition.

For instance, the landscape seen below this amazing sky has all the necessarily elements - a meandering stream, distant mountains and lush, green foliage, but they are not necessarily sitting together in a balanced composition. And annoyingly, the best part of the sky is off to the left and doesn't really fit the landscape below it - at least not from this vantage point.

So, I have no solution for this except to commisserate. With the file as submitted, there's not a lot we can do, but here are some minor suggestions. First, let's simplify the composition by removing the tree on the right, but keeping the moon in position. The exposure is too dark for the foreground, so let's lighten that up next. Finally, let's darken down the light tree tips along the bottom right and the edges of the bottom left as well, just to contain the frame. That's a little better and the overall image could be lighter still at the risk of losing some of the mood.

So what's the solution? If you have a few great locations near your home that just need a good sky, keep them in mind for when you see the sky about to explode. Otherwise, just keep at it because eventually, Mother Nature relents and it all comes together! 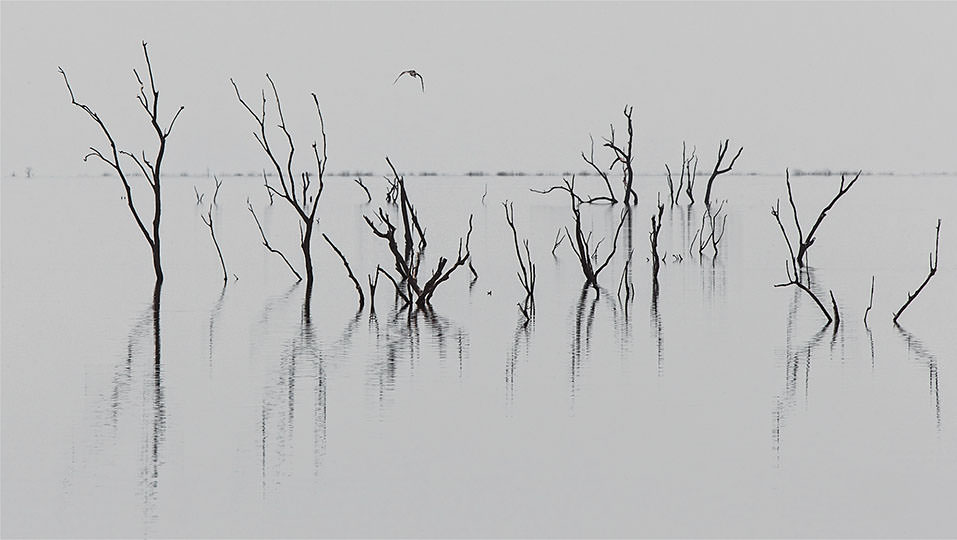 Our Anonymous Photographer has left us very little to do. The image is beautifully framed and timed with the birds positioned perfectly in relation to the trees (there’s a tiny second bird on the water in the centre). The composition is elegant in its simplicity and no doubt the choice of subject matter and the use of the reflection has added to its appeal. The only thing we’d suggest is a little more room to the right in the framing. Why? If you notice the distance between the trees and the edges of the frame on the top left, compared to the middle right, the right seems a little more ‘squished’. What happens if we add a little space? 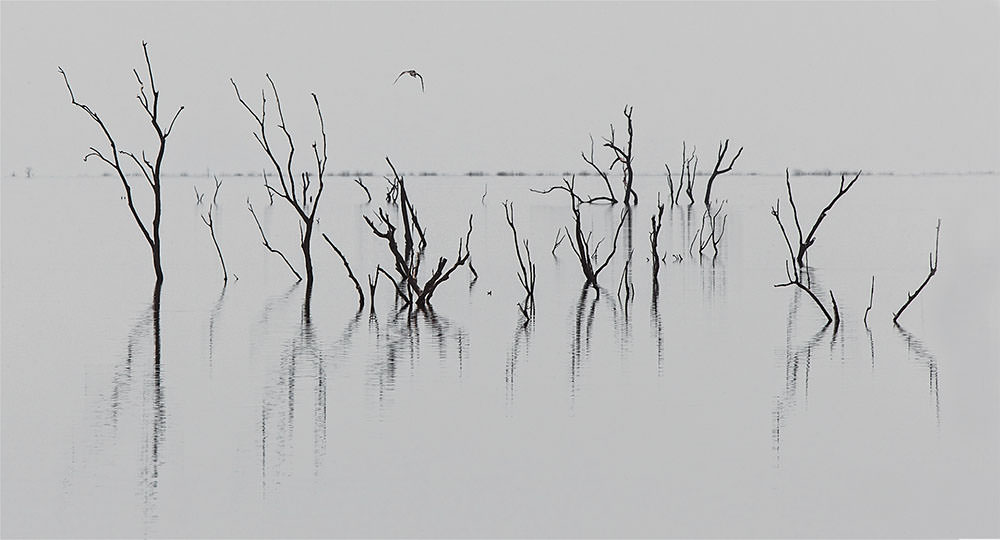 This to our mind is better balanced – but we’re nitpicking we know. So, what about the tonality. Other images of this style are sometimes higher in contrast with a whiter backdrop – like this: 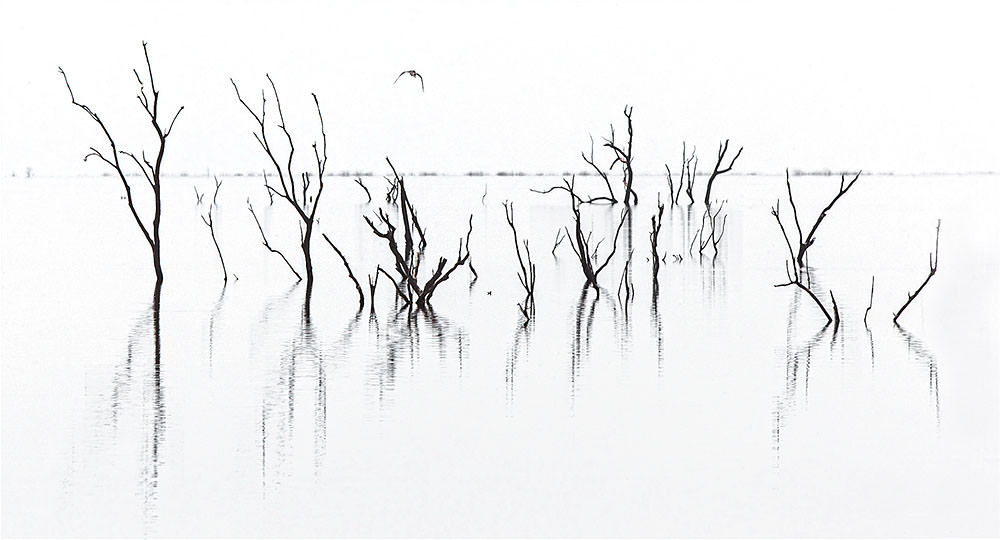 Many people may prefer this result as being cleaner, but maybe the photographer intentionally wanted to keep some tone in the image, in which case we’re scratching to improve it. Maybe a little colour could help? 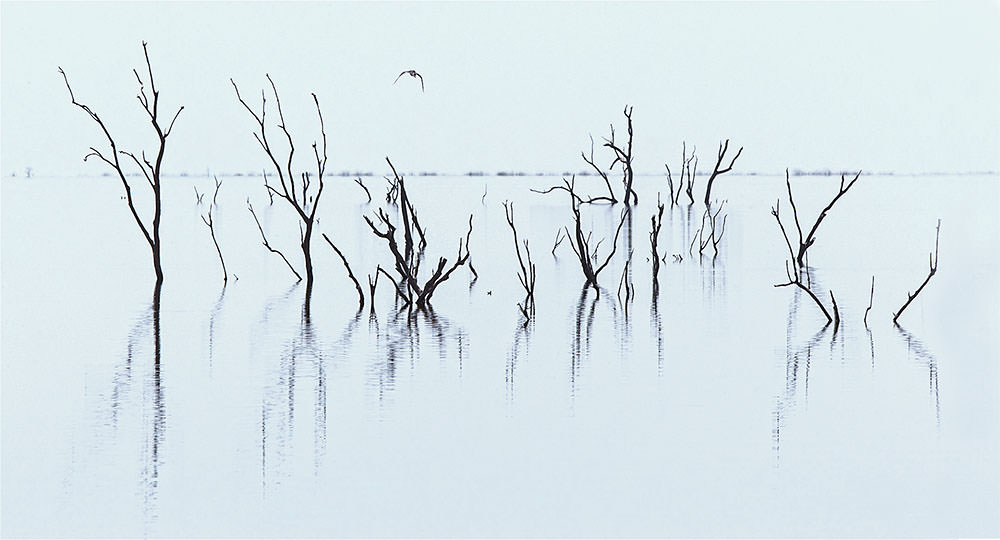 Sometimes when it comes to feedback, it’s better to just say, ‘Great shot’! 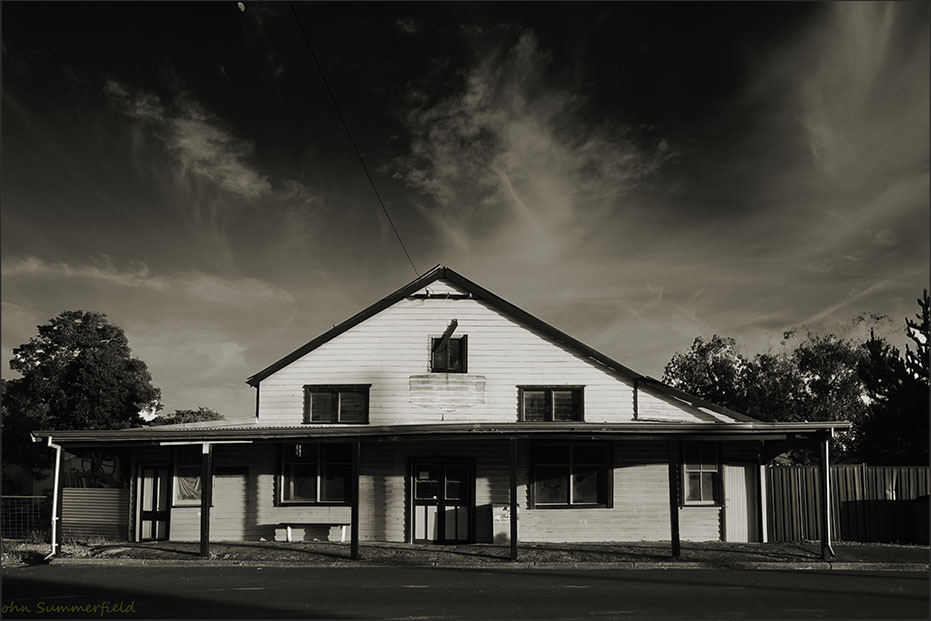 Our Anonymous Photographer, John Summerfield, has given us a challenging situation. He writes about this building being a part of his life as far back as he can recall.

So, this is a personal photograph with lots of ‘baggage’. And baggage is a good thing. We all have baggage when it comes to family photographs - the photographs transcend being an image or a work of art because of the meaning the subject of the photograph has for us. This appears to be the case with this building for John.

John asks how this photograph would go in a competition? What would a judge see in the image? The answer is a very competent architectural study, but perhaps a little closely cropped. While the sky is interesting, the fact there is so little space around the subject gives it a sense of being more of a record shot than an art piece, but this is a subjective opinion.

How would we improve it? There’s not a lot that needs improving, but perhaps a little more detail in the shadows would help? 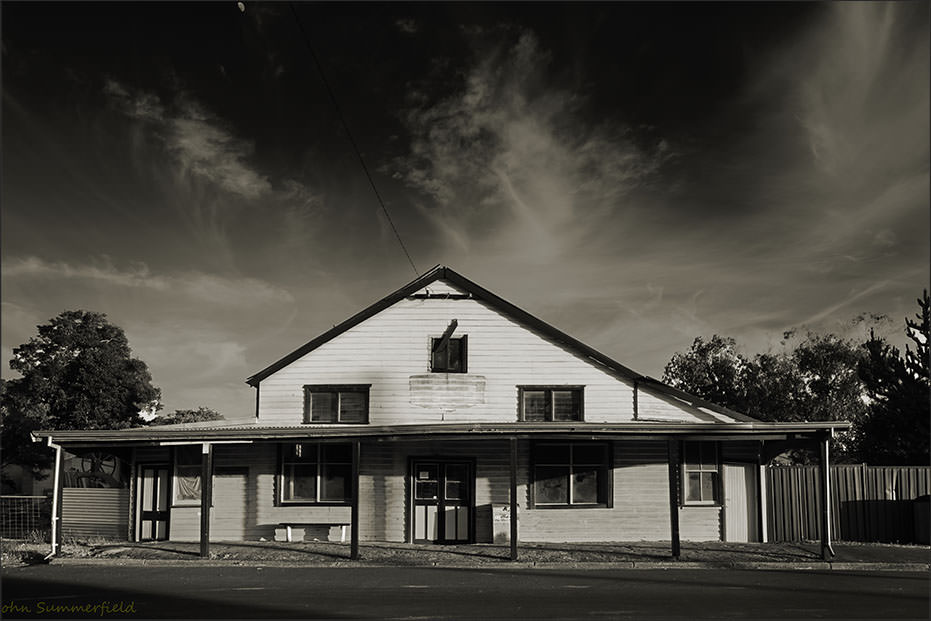 It’s only a small change, but reveals a little more of the character perhaps. Also, given John has used such a front-on camera position, the building itself doesn’t look quite square. This might in fact be the case, but by using a little perspective control in Photoshop, it can be straightened up, perhaps improving its strength in the frame. 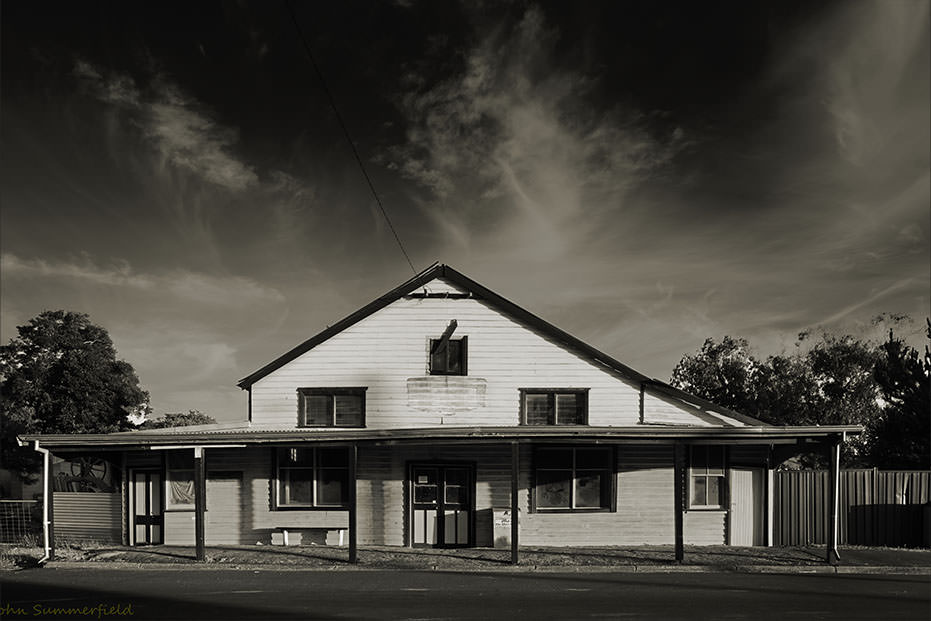 However, it’s still too closely cropped and too much of a record shot. Looking at John’s signature in the file submitted (was this a darkroom photo scanned perhaps?), we’re thinking there was probably a little more breathing space in his original as well – so we’ve added some in quickly to give you a sense of what a wider angle could have produced. 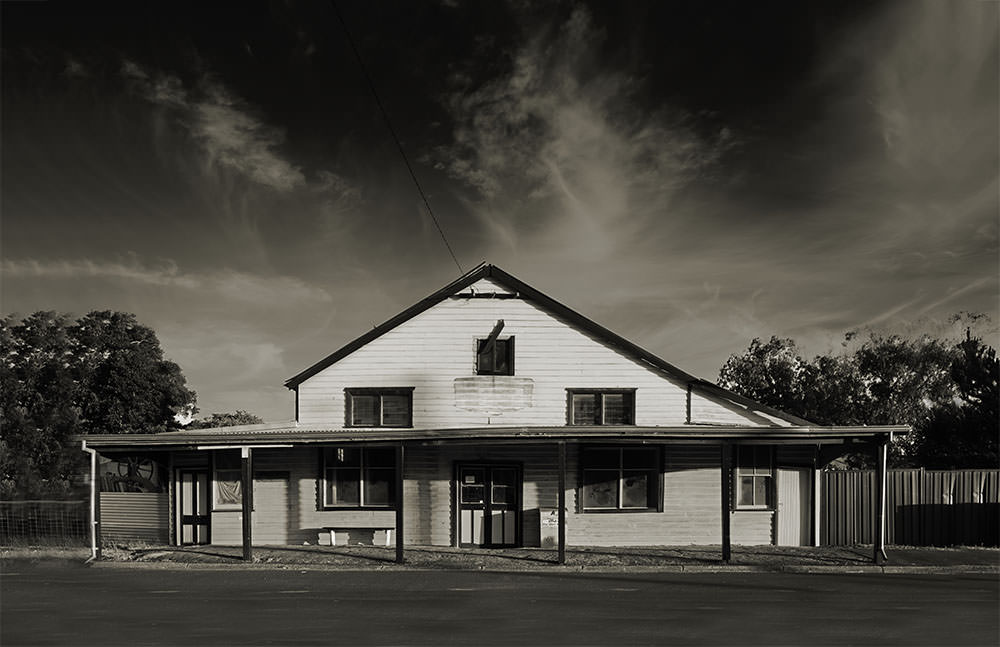 And having made this adjustment, a little darkening top and bottom ensures the eye is kept in the middle of the frame where John’s wonderful building sits. 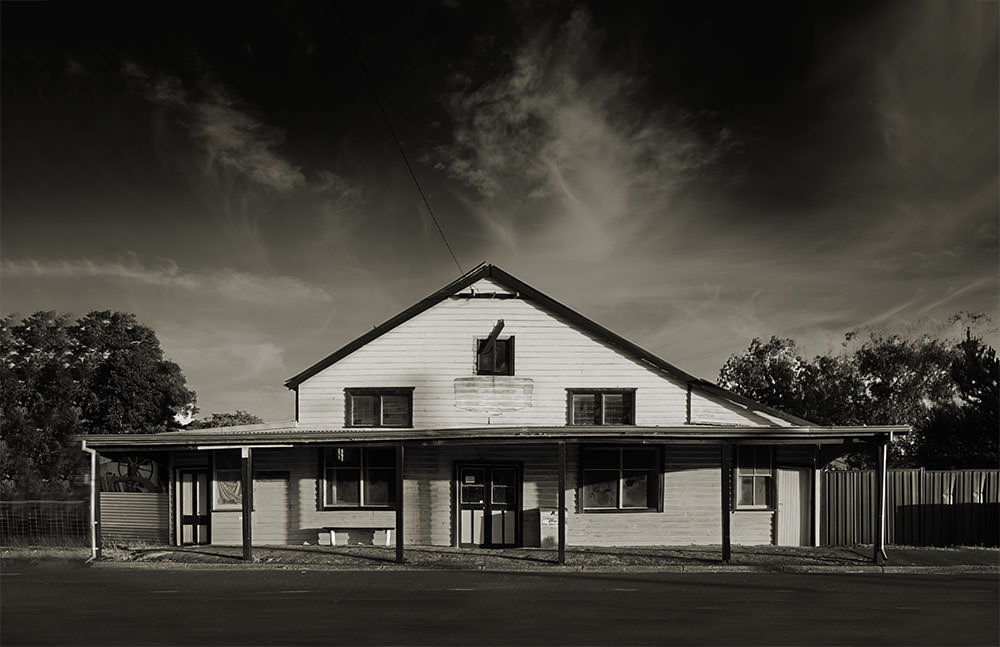 Is it a competition winner? That always depends on the other photographs that are entered into the same competition, but it’s certainly an ‘acceptance and worthy of hanging. 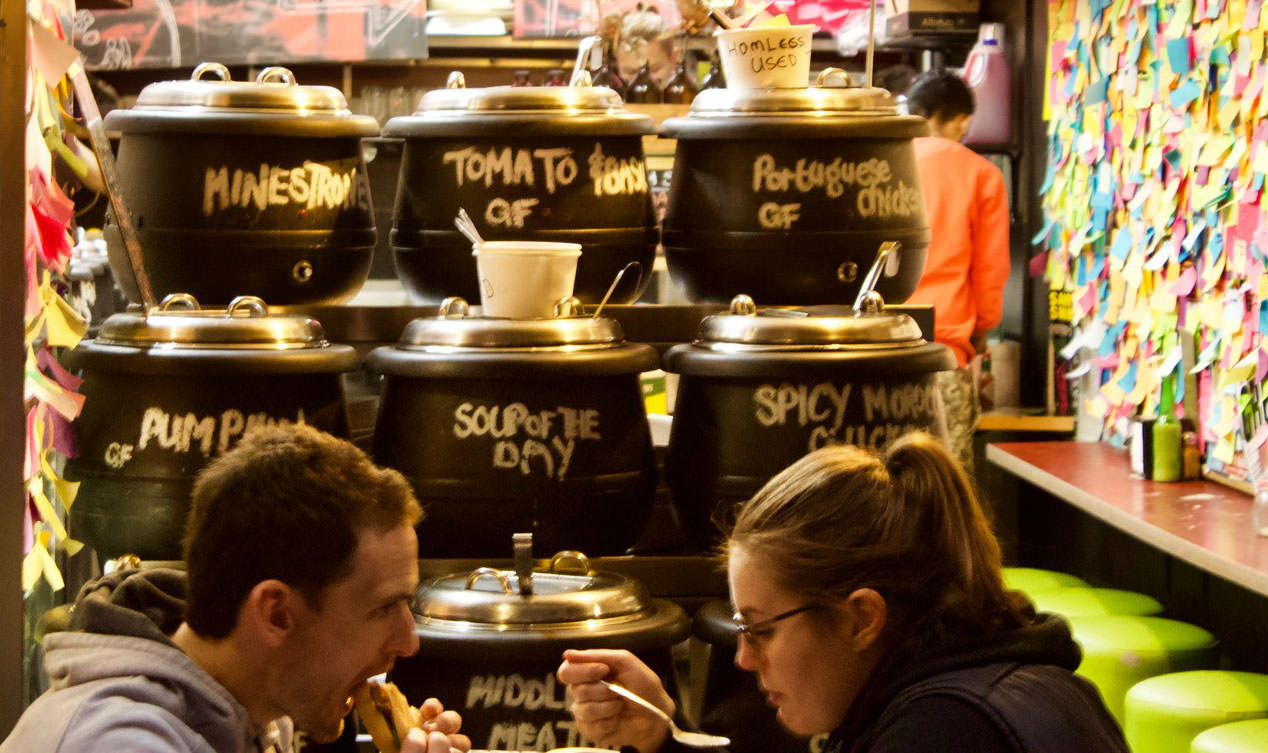 Our Anonymous Photographer believes his photo tells a story – and it certainly does. The idea and concept of juxtaposing the diners with the pots of soup behind is a great one and certainly tells the viewer what it’s all about. However, we’re not quite so sure about the framing. The fact that the two diners are so severely cropped at the bottom, while there’s still room at the top and to the sides of the pots, seems a little out of balance and perhaps unintended? A wider angle at the time of capture could have solved this, but given this is what we have, could a tighter crop make the severe framing at the bottom seem intentional? 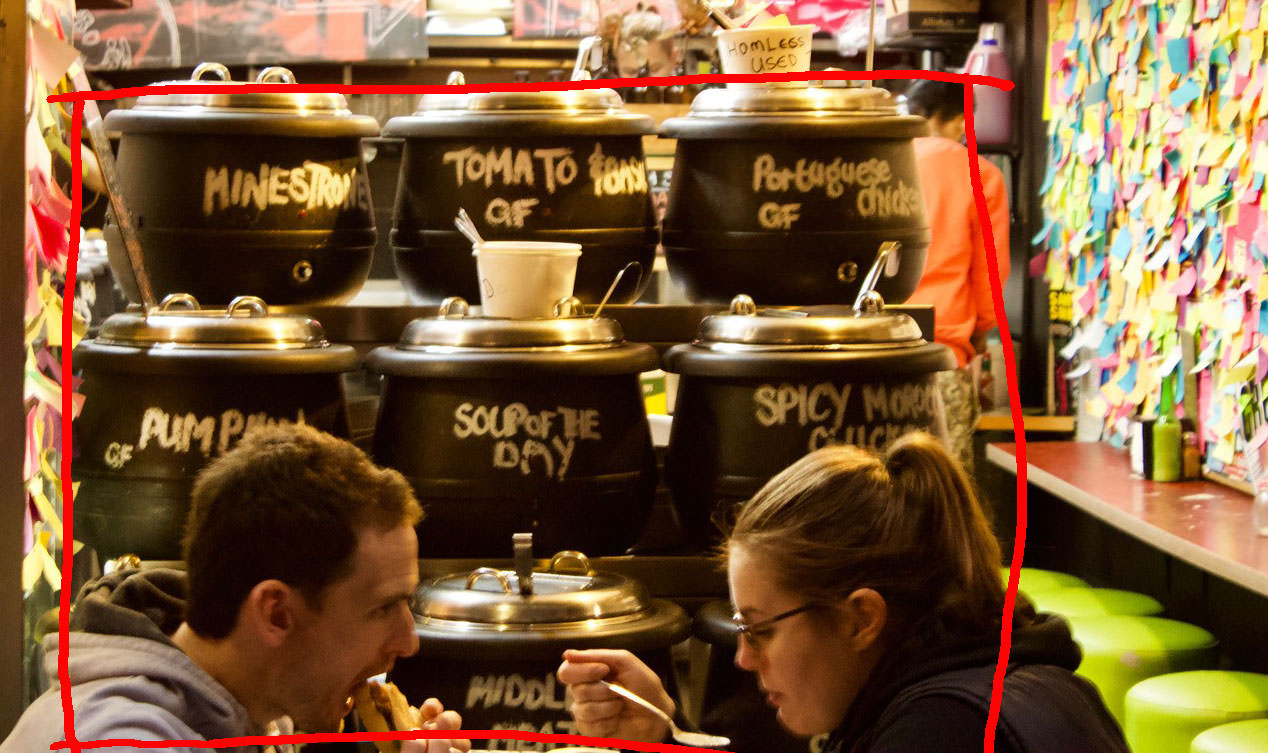 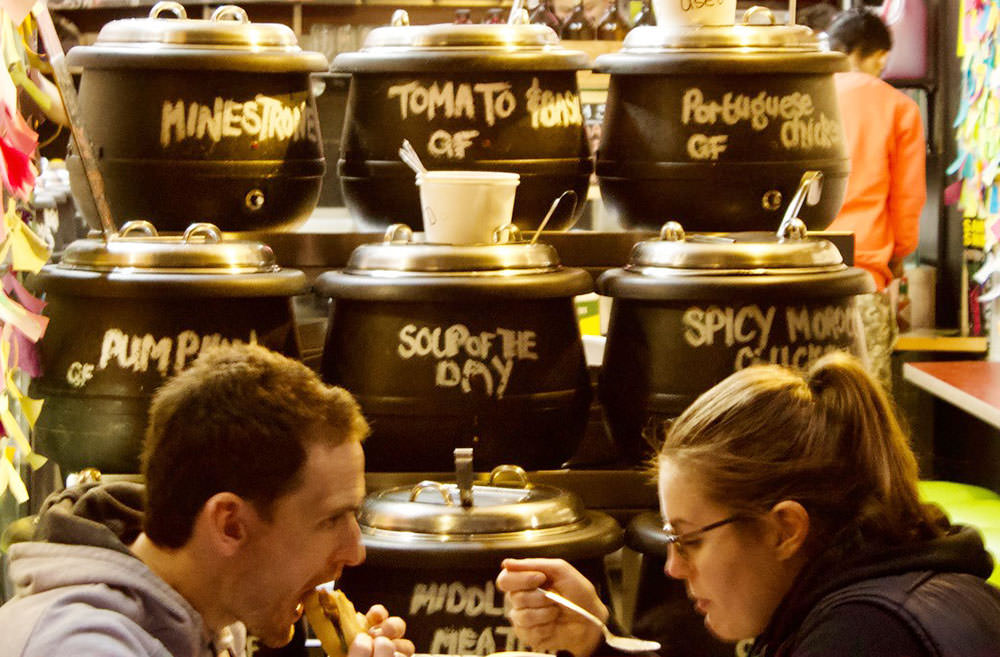 We have chosen to crop with the diners centred. This leaves a bit of the background on the right which is a little distracting, so lets darken that down, vignette the edges and lighten the faces. 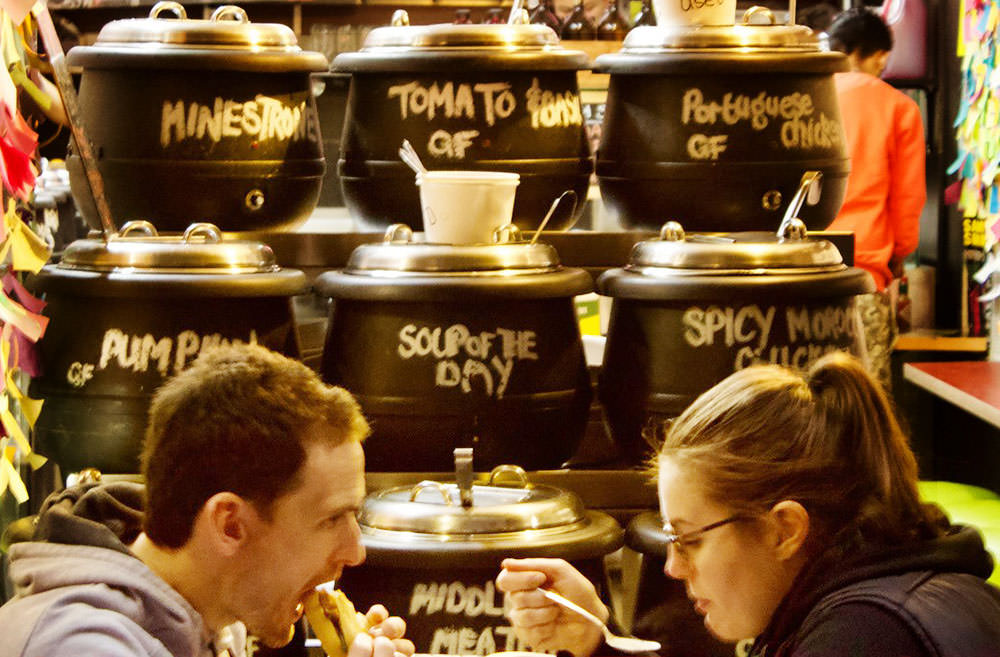 Shooting under artificial light is always challenging for colour photography, so one thought was to switch to monochrome. This is a personal choice – not everyone loves B&W. 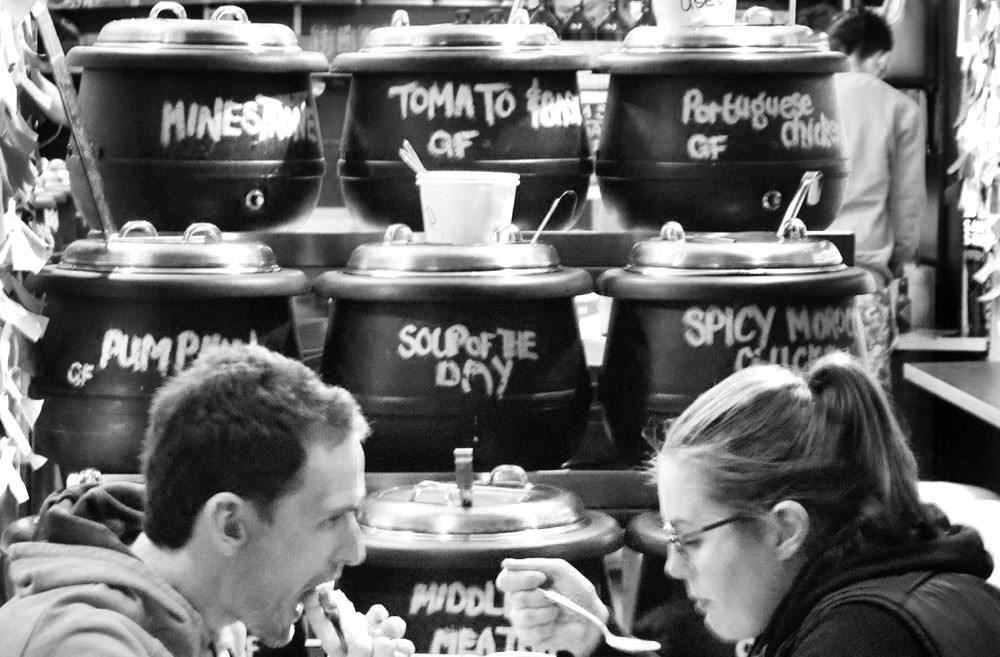 Having done all this, does the tight framing at the bottom of the frame now look intentional? We’re not quite sure, so maybe an even more severe crop could do the trick? What do you think? 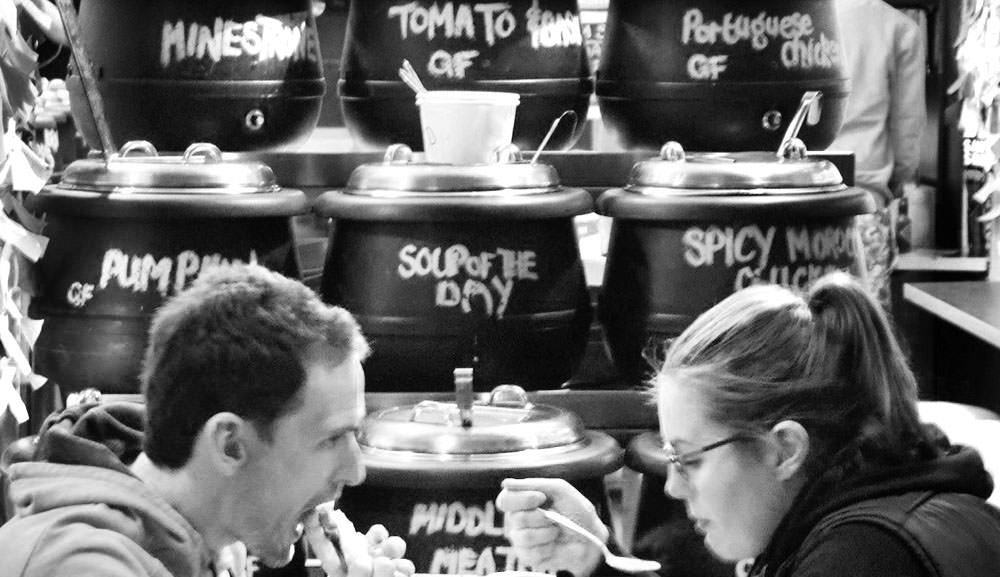